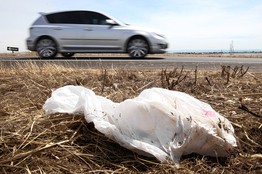 The lawsuit laid bare how much remains unknown about bags’ environmental impact. There is little information available on what proportion of plastic bags are reused or recycled, or on how many times a reusable bag must make the round trip to the store before it has earned the status of a net positive for the environment. And some frequently cited numbers in the debate are derived from studies funded by parties with a stake in the fight.

To support the contention that most store-provided plastic bags are reused, bag makers cite a 2007 survey funded by the American Chemistry Council, a trade group for chemical companies including plastic-bag makers. The survey found that 92% of respondents answered “yes” to the question, “Do you or does anyone in your household ever reuse plastic shopping bags?” But the survey didn’t distinguish between people who reuse a plastic bag once a year and people who reuse all their bags.

The answer matters because bags that get a second or third use—for instance, as trash-can liners—aren’t as big of a drag on the environment. Joseph Greene, a chemical engineer at California State University, Chico, figured that reusable bags must be used nine times before they begin to accrue environmental savings compared with plastic bags that aren’t reused.

Prof. Greene calculated that figure as a paid consultant for a report commissioned by reusable-bag maker ChicoBag Co., of Chico, Calif., the defendant in the recently settled lawsuit. Prof. Greene previously has consulted on behalf of plastic-bag makers.

The math comparing plastic and reusable bags changes if plastic bags are reused 40% of the time. That is the average figure reported by about 1,000 U.K. consumers in a 2005 survey. Then, reusable bags need to be used a minimum of 13 times to make them environmentally worthwhile compared with plastic bags, according to Prof. Greene. His report doesn’t account for the environmental cost of washing reusable bags.

Earlier this year, three plastic-bag manufacturers sued ChicoBag, claiming it included misleading statistics in its marketing materials. Last week one of the plaintiffs, Hartsville, S.C.-based Hilex Poly Co., and ChicoBag settled, with ChicoBag making an undisclosed payment and both sides agreeing to change which statistics they cite, and how. As part of the settlement, ChicoBag also agreed to tell visitors to its website that its bags must be washed when dirty, while Hilex agreed to provide more context to numbers it uses. The other lawsuits against ChicoBag were dropped.

“Consumers were misled because false statistics and false information were used” by ChicoBag, says Jennifer Mallory, an attorney representing Hilex in the case. “In this area of consumer advertising, it is very important that statistics and sources be correct.”

More on the Numbers Guy blog

ChicoBag had at one point cited on its website the estimate that its bags begin to protect the environment once they have been used 11 times. The company attributed this to the Environmental Protection Agency’s website. The EPA took down the web page with that statistic after the agency’s New England regional office conducted “a periodic evaluation of the content for its accuracy,” according to an EPA spokeswoman. ChicoBag founder Andy Keller said Prof. Greene’s report, citing various published studies, backs up the number.

Another disputed number is the rate at which plastic bags are recycled. The main reason for the disagreements is that similar types of plastics are recycled together. While the total quantity of recycled plastic is measured, the EPA doesn’t distinguish between grocery bags and other plastic wrapping.

ChicoBag had stated on its website that 1% of plastic bags are recycled. That is from a 2005 EPA report. EPA statistics no longer separate plastic bags from similar plastic materials such as wraps for pallets. That category of packaging is recycled at a rate of 9.4%, according to an EPA spokeswoman. Hilex, the plaintiff that settled with ChicoBag, calculates a rate of 11.8% after removing some kinds of plastic material that it says aren’t recyclable, such as meat packaging. Both parties agreed to provide more context, including dates, when they cite statistics on recycling.

An EPA spokeswoman says calculating the recycling rate for plastic bags poses significant challenges: “Unlike with bottles and cans, bags are collected for recycling with other similar products”—including newspaper sleeves and dry-cleaning bags.”

Mr. Keller, the ChicoBag founder, says the numerical disputes tend to miss the bigger picture. “I think an accurate number is important,” Mr. Keller says. “In the meantime, we’re arguing over 1% or 12%. Both those numbers are anemic.”